Menu
GEOCACHING RAVITEAM
Urban Hiking National Day 31st October 2017
by Erasmus+ “Geocaching Minds on the Move” International Team
WALK AND DISCOVER MISTERIES & LEGENDS in NOVARA
Broletto - Canonica - Piazza delle Erbe - Angolo delle Ore - Vicolo Monte Ariolo
​- Cupola di San Gaudenzio - Casa Bossi - Castello Sforzesco
45The BROLETTO  map
THE NOBLE FRANK, THE LADY AND HER LOVER
The story goes that, in the old times, on occasion of a Jubilee (that is a period of time proclaimed by the Roman Catholic pope usually every 25 years as a time of special solemnity) a young man of royal origins was travelling to Rome from the land of the Franks with his beautiful wife. The journey was long and quite exhausting so they decided to stop for a few days in a place called Casaleggio (a village still existing nowadays, not far from here). They were hosted for a few days by a noble family in their manor. There the beautiful lady fell in love with a young nobleman, beginning a love affair.
While the husband was getting ready to leave and continue the journey to Rome, his wife was looking for an excuse to remain in those lands with her lover, so she pretended she was sick. Her husband, who was at the same time self-centered and naive, left for Rome by himself. But when he was on the way he kept thinking about his poor wife, ill and lonely, and felt guilty, so he suddenly decided to go back to her. Unfortunately, once there he caught the two lovers by surprise. In order to run away from the husband’s rage the two lovers sought refuge in a castle not far from there. But the Frank nobleman found them: he was so mad that he set the castle to fire, and ordered his wife to be burnt and her lover to be hanged.
In the old times this sort of things were quite normal, so the pope pardoned the Frank provided he would have built a church in the name of the saints Gervasio and Protasio, in honour of the bishop of Milan, who was the owner of the lands. The church was soon erected on a small hill between the rivers Agogna and Terdoppio. And near the church a new town was established – its name was NOVARIA.
Of course this is just a story, reported by the historian Pietro Azario (1312-1366) as part of a propaganda campaign on behalf of the Visconti family and their friends. Anyhow, it contributes to give a romantic and dramatic twist to the story of the city.
From now on, when you cross the courtyard, give a glance to the two figures on the left end of the frieze – you will remember what you have just read.
Some other historians have given a different meaning to the same two figures: they say that they portray a soldier making love to his girl. The soldier is apparently leaving for war and the act was reckoned to bring good luck and to propitiate victory over the enemies.
------------------------------------------------------
As mentioned earlier, it was in the Broletto courtyard and in the surrounding buildings that in the old days the city's public life was taking place:
NORTH   the Arengo Palace, the oldest building (XIII century) – it was the seat of the City Council;
EAST       the Paratici Palace, the Guild Palace - it belonged to the guilds’ corporations; its older part dates back to the 13th century, it was later renewed and enlarged in the XVIII century and embellished with a loggia;
SOUTH   the Palace of the Podestà (XIV-XV century) - it was the palace of the Chief Magistrate of the town (the highest position in a city in Medieval times); it has ogival arches and windows with brick frames;
WEST      the Palace of the Refendari (XIV-XV century) - it was the palace of the officers working for the Podestà. 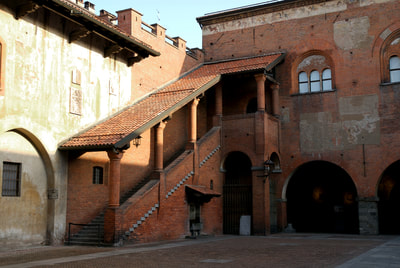 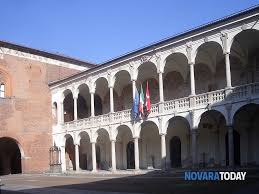 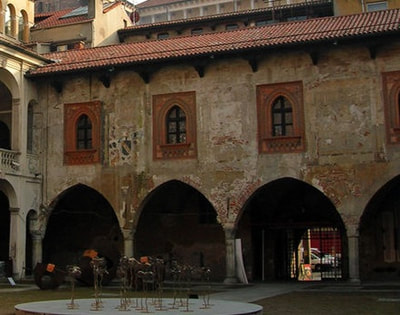 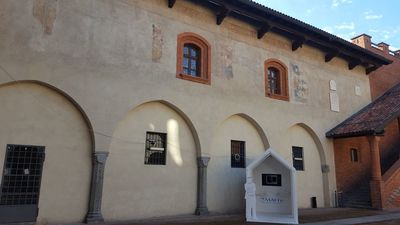 In the yard a market took place daily: stalls were placed all around; the town criers made their announcements from a tall stone, and under the arches the consuls of justice had their work benches. The convicts were condemned to the stocks and exposed to public humiliation.
The city taxes were also paid under the north porches, and each neighbourhood and village had a separate table recognisable by its coats of arms, usually depicting various animals such as the bear, the lion, the deer and the eagle. 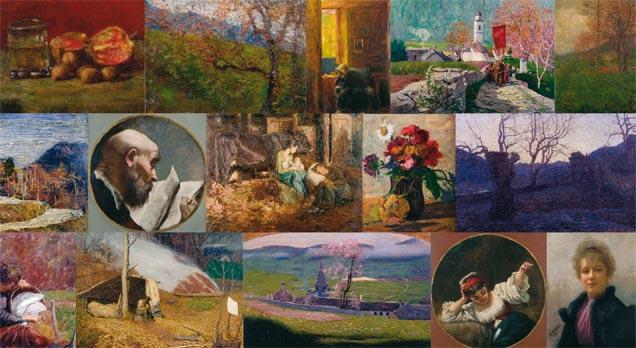