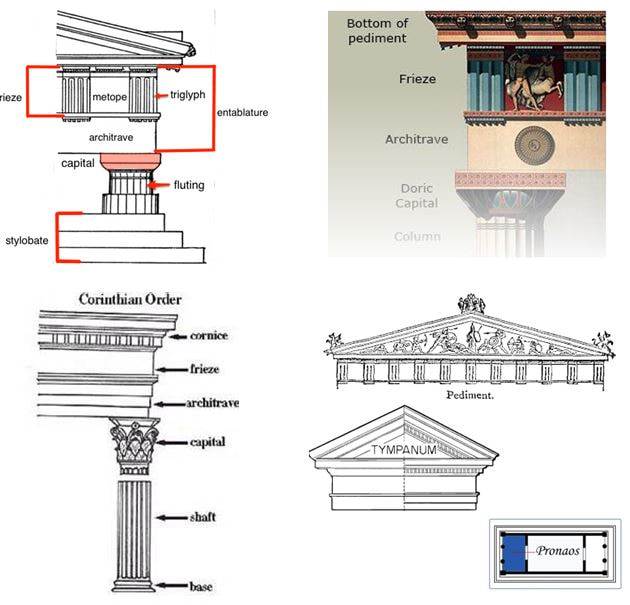 Some definitions
Architrave       Main weightbearing and weight-distributing element of entablature
Cornice           Projecting crowning member of the entablature framing the pediment
Entablature     The upper part of a classical building supported by columns or a colonnade, comprising the architrave, frieze, and cornice
Frieze              Molded horizontal projection that together with two sloping cornices forms a triangle that enframes the pediment
Metope            The square panel between the triglyphs in a Doric frieze, often sculpted in relief
Naos or cella   A room with no windows that usually housed the cult statue of the deity
Pediment        Triangular shape at the end of a building, formed by the ends of the sloping roof above the colonnade
Peristyle          External colonnade on all four sides
Pronaos          The space, or porch, in front of the cella, or naos, of an ancient Greek temple
Stoa                A covered walkway or portico, commonly for public use.
Stylobate         The stepped platform upon which colonnades of temple columns are placed
Triglyph           A stone block in a Doric frieze, having three vertical channels
Tympanum     A vertical recessed triangular space forming the centre of a pediment, typically decorated

Learn correct pronunciation at https://quizlet.com/4519197/parts-of-greek-temples-flash-cards/
See also: Greek Temple: Architecture, Construction & Parts: http://study.com/academy/lesson/greek-temple-architecture-construction-parts.html
​
QUESTION 2 -  ​Now have a look at the columns. For sure you have recognised them as a typical element of a Greek temple. But which Greek style are they inspired to? 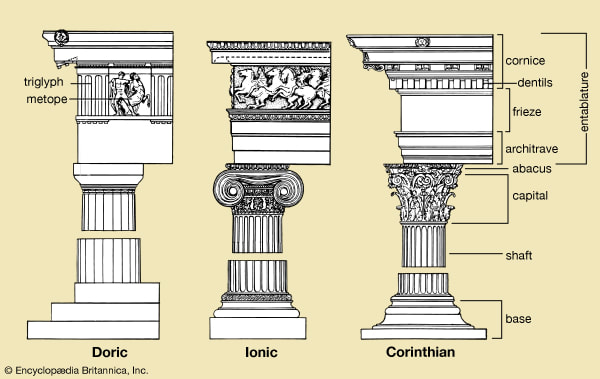 Sculptor Giuseppe Argenti embellished the two buildings with allegorical sculptures. In each tympanum you can see female statues, on one building they represent Novara’s coat of arms and the other the royal family, thus reinforcing the bond between the king and the city.
​QUESTION 3 -  On which building can you see Novara’s coat of Arms?
On the façade of the buildings there are niches hosting statues that are the personifications of virtues such as Royal Charity, and Vigilance, plus Agriculture and Commerce.
Royal Charity is a lady wearing  royal robes holding a pine branch and an olive branch, next to her sits an owl. (the pine grows without damaging other trees, it’s thus a symbol of benevolence and wisdom in economic planning; the olive tree is a symbol of peace; the owl can see in the dark)
Gratitude is depicted as a young woman carrying a bunch of broad beans and petting a stork. In the plinth
Agriculture is depicted as Psyche, and she is leaning on a plough.
Commerce is symbolized by a young version of Mercury; the god is shown with curly hair, a winged hat and a bag. The bag is half hidden, since in business you must be discreet. The griffon next to him holds some coupon bonds to underline the importance of public debt in business and commerce.
DO QUIZ 1A here to get a hint for a FINAL CACHE
​​QUESTION 4 -  Have a look at the buildings and identify the statues:

DO QUIZ 1B here to get a hint for a FINAL CACHE
In the XIX there were other two statues placed on two pillars: Gratitude and Concordance. These statues were later removed and can now be found at the entrance of the city cemetery (Concordance is sitting and holding a torch and a pomegranate branch; Vigilance, also sitting, has an oil lamp on her lap and next to her chair sits a rooster).
Do not forget to look for the cache! You can then move on to the next step.
From the Barriera Albertina head North along the alley called Baluardo Quintino Sella. This alley was built on top of the Spanish walls and somewhere you can still see some parts of them.
Walk along the  pedestrian and bike lane. About 500 metres on your right you will see a big villa with columns on the ground, first and second floor. That is Casa Bossi, a villa known by almost all the Novaresi:
​
move on to CASA BOSSI